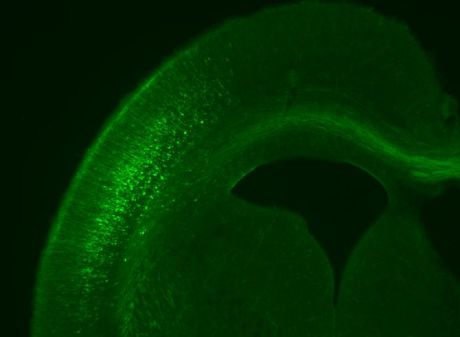 The research group of Prof. Dr. Tarabykin investigates in the cellular and molecular mechanisms underlying cell fate specification in the mouse cerebral cortex.

"Cortical Development" focusses on the mechanisms controlling the generation, migration and axonal guidance of neurons of different cortical layers and areas.

During development, several populations of progenitor cells residing in the ventricular and subventricular zones in the dorsal telencephalon generate a large variety of neurons. These neurons acquire distinct morphologies, specific connections and physiological properties and serve distinct functions in the mammalian cerebral cortex.

The research group of Prof. Dr. Tarabykin investigates in the cellular and molecular mechanisms underlying cell fate specification in the mouse cerebral cortex. “Cortical Development” focusses on the mechanisms controlling the generation, migration and axonal guidance of neurons of different cortical layers and areas. The scientific methods combine genetic, molecular and cell biological approaches to identify and characterize genes that control cortical development.

The fate of cortical progenitors, which progressively generate neurons and glial cells during development, is determined by temporally and spatially regulated signaling mechanisms.

A single layer of neuroepithelial cells lining the embryonic neural tube gives rise to the entire repertoire of neurons, astrocytes and oligodendrocytes of the adult central nervous system (CNS). Early in development some progenitors of the cortical ventricular zone (VZ) are multipotent and can generate both projection neurons and astrocytes. Later, precursor cells tend to become more lineage-restricted. In mice, the generation of cortical projection neurons and glia starts at E11.5 and follows a temporally specified sequence of cell commitment and differentiation in vivo and ex vivo. Following an inside first - outside last pattern of cortical lamination, neurons of deep layers 6 and 5 are generated prior to the molecularly and functionally distinct neurons of upper layers 4, 3 and 2. The time of birth of a neuron can be used to accurately predict its laminar fate, however the molecular determinants of this process are not clearly understood.

The "Cortical Development" research group discovered that young neurons can signal back to neuronal precursors and by doing so regulate the fate of uncommitted precursors and ensure the production of appropriate numbers of different types of neurons and glia. "Cortical Development" established the Sip1 transcriptional repressor as a key mediator of this mechanism through its negative regulation of the expression of secreted factors in postmitotic neurons.

Cortical projection neurons are arranged in six cortical layers. Neurons within each layer are generated at similar times and share similar morphology and patterns of connectivity. Neurons of upper layers 2 and 3, as well as some layer 5 neurons interconnect different cortical areas ipsilaterally or contralaterally via the corpus callosum. Layer 4 is the major input layer, while most neurons of deep layers 5 and 6 send their axons to subcortical targets in the spinal cord, pons, tectum, and thalamus.

The "Cortical Development" research group identified a transcription factor, named Satb2, which controls postmitotic specification of neurons in superficial layers of the neocortex. Satb2 regulates the expression of genes responsible for proper connectivity of cortico-cortical neurons.  When Satb2 is inactivated these neurons start expressing the genetic programs of deep layer neurons. As a result these neurons project to subcortical targets.

The cerebral cortex of all mammalian species possesses a distinct cytoarchitecture. It is composed of six layers (or laminae) of radially organized pyramidal projecting neurons and local circuit interneurons. Over the course of evolution, the largest part of the cerebral cortex, the neocortex, markedly expanded in size and complexity and because of its executive function is considered the paramount achievement of mammalian brain development. Assembly of the neocortex sets biological grounds for our ability to process fear, feel love or plan and design scientific projects, all of which are collectively termed as higher cognitive functions (Rakic, 2009).

Uninterrupted establishment of neuronal connections is the substrate of the superior executive capacity of the neocortex. Projection neurons present a typical pyramidal morphology and extend axons to different regions of the central nervous system. Notably, projection neurons of each cortical lamina share distinct physiological properties and extrinsic connectivity (Schubert et al., 2007; Staiger et al., 2016). For instance, neurons of deeper layers (layer V and VI) establish projections outside of the cortex while upper layer neurons (cortical layer II-IV) project to other cortical regions, forming the main commissural tracts of the brain, such as the corpus callosum. Aberrances in upper layer neurogenesis lead to anatomical brain defects, such as agenesis of the corpus callosum, and contribute to behavioral disruptions in neurodevelopmental disorders, e.g. in autism spectrum disorders, or disorders associated with intellectual disability (Britanova et al., 2008; Fang et al., 2014).

The development of the cortex requires a series of tightly orchestrated processes. Neurons are born upon mitoses of progenitors in transitory proliferative zones and then migrate to their proper laminar positions within cortical layers. Intriguingly, as neurogenesis proceeds, the competence of neural progenitors to give rise to various subtypes is progressively restricted. Early cortical progenitors are able to generate neurons of upper and deeper cortical layers. In contrast, progenitors that undergo their final mitosis later in neurogenesis have less plasticity and give rise to neurons of upper layers. Accordingly, neurons of each layer are born in a tightly controlled inside-first, outside-last manner, where later born, upper layer neurons move through their younger siblings, distributed in deeper layers (Figure 1A) (Finlay and Darlington, 1995; Luzzati, 2015; Molyneaux et al., 2007).

Great deal of my research interest lies in the fundamental processes that control corticogenesis and are concerned with specification of fate. In the first branch of my scientific endeavor, I have addressed acquisition of neuronal polarity, which enables specification of axons and dendrites (or neurite fate establishment) by differentiating neurons. Neuronal polarity establishment is pivotal for neuronal function – nerve cells receive afferent signals at dendritic compartments to then transmit the efferent responses through a single axon. Disturbances in polarity acquisition may lead to no axon phenotype or formation of multiple axons and are often associated with aberrant migration of neurons within the cortex, which may engender severe defects in cortical lamination.

Second branch of my research is concerned with acquisition of neuronal cell fate by cortical neurons. During neurogenesis, a neuronal progenitor makes an important decision whether to give rise to an upper or a deeper layer neuron. This in turn has fundamental consequences for the development of the mammalian cortex and the formation of brain circuits. Specifically, I am interested in novel signaling pathways that play an important role in these aspects of neurogenesis. Of focus are pathways that concern protein phosphorylation, but also ubiquitylation, as recent discoveries have shed light onto this posttranslational modification as a potent regulatory principle of neuronal development (reviewed in (Ambrozkiewicz and Kawabe, 2015)). I am also particularly interested in spatiotemporal dynamics of gene expression of determinants of upper and deeper layer neurons, such as Special AT-rich sequence-binding protein Satb2 gene, during cortical development.

To study both aspects of neuronal development, we use a multitude of in vitro approaches, such as primary neuronal cultures and organotypic slice cultures from murine brains. These experimental methods are very powerful to thoroughly characterize neuronal development in a Petri dish (Figure 1). As an example, we recently developed a screening approach to study signaling pathways that control activation of Satb2 gene locus during development (Ambrozkiewicz et al., 2017) (Figure 2).

To further extend our understanding of cortical development, we take advantage of an in vivo method, in utero electroporation (IUE). This method allows transfection of a pool of cortical progenitors residing on the surfaces of the murine embryonic ventricles. DNA of interest is injected into the ventricle and transfected to the cells outlining its surface upon application of directed electrical current. Due to the fact that laminar identity of cortical neurons is interwoven with the timing of neurogenesis (neurons of deeper layers are born first; upper layer neurons are born later), IUE allows to target neuronal progenitors of well-defined fates (Saito, 2006). This allows to modify dosage of genes of interest and enables to study almost every aspect of development in vivo (Figure 3): progenitor pools, differentiation, multipolar-to-bipolar transitions, neuronal morphology (Figure 4), neuronal migration, dendrite outgrowth, axon guidance, branching, neuronal connectivity (Figure 5), synapse formation, morphology of dendritic spines, etc. For example - (Ripamonti et al., 2017).

The last step of such an experimental workflow is imaging, and for that we use a broad range of microscopy techniques –basic epifluorescence, confocal, but also light sheet microscopy, that combined with brain clearing enables to visualize global connectivity of transfected neurons in vivo.