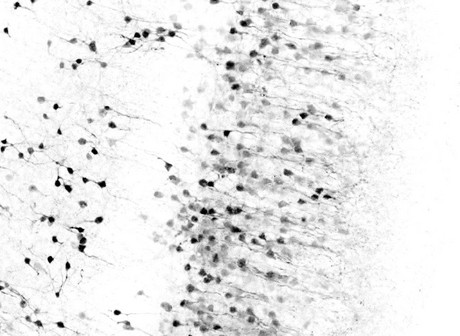 The group is active in the field of:

Research fields of the Neurodegeneration and Neuroimmunology research group

The group of Prof. Dr. Seija Lehnardt is active in the field of neuroimmunology and neurodegeneration with the following major areas:

The major aim of Prof. Dr. Seija Lehnardt's group is to determine how and to which extent innate immune responses contribute to neurodegeneration in CNS disorders. Identification of the underlying molecular mechanisms may open the way to the development of new therapeutic strategies.

The role of innate immune receptors in inflammatory neurodegeneration

The innate immune system responds to infection via highly conserved pattern-recognition receptors including the Toll-like receptors (TLRs) that signal immediate response to invariant structures of pathogens.

However, there is increasing evidence that TLRs may play a crucial role not only in regulating immunity against microbial ligands but also in cellular responses to host-derived stimuli: The immune and inflammatory responses can be triggered in the apparent absence of microbial agents.

Although the innate immune system is essential for the integrity of the central nervous system (CNS), the consequences of its activation may also be deleterious for the host. Activation of microglia, the major immune cell in the CNS, occurs in essentially all diseases of the CNS and was an early observation of histologists in the late 19th and early 20th centuries.

TLRs are expressed in microglia as well as in other cells of the CNS, and recent data indicate that these receptors play a crucial role in various CNS diseases such as stroke, multiple sclerosis, meningitis, and amyotrophic lateral sclerosis. In addition to infectious ligands of TLRs, host-derived ligands may exist in the CNS. Similar to microbial ligands, these CNS cell-derived ligands may activate the resident host defense of the CNS, thereby initiating inflammation and contributing to neuronal damage.