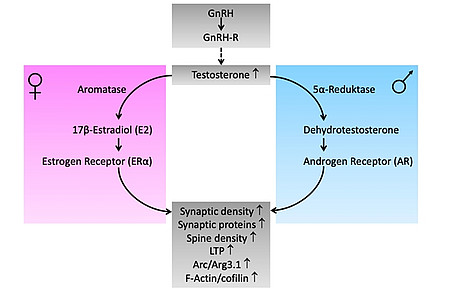 Men perform better than women when testing remembrance of spatial relationships, whereas the reverse holds true for semantic information, but the neurobiological basis for these differences remain elusive. The complex mechanisms underlying the formation and retention of memories are assumed to involve synaptic plasticity in the hippocampus and cortex. Synaptic plasticity comprise both structural changes in predominantly dendritic spine and spine synapse dynamics and the accompanying physiological plasticity: long-term potentiation (LTP) and long term depression (LTD). If synaptic plasticity underlies memory formation, which also involves obtaining and eventually retrieving information, synaptic plasticity should differ in male and female animals, and furthermore, sex steroids are likely to influence synaptic plasticity.

In 2003 a new paradigm emerged when we and others found that sex steroids are synthesized in the brain de novo which act in a paracrine way, thus independent from the gonads, the major source of sex steroids. We found a clear sex-dependency after inhibition of sex steroid synthesis (neurosteroids) in the hippocampus, and showed that synaptic plasticity relies on estradiol in the female hippocampus and DHT in the male hippocampus. Furthermore neurosteroid synthesis is sex-dependently controlled by gonadotropin releasing hormone (GnRH), which is released from the hypothalamus in a tonic way in males and corresponds to the estrus cycle in females.

The differences between male and female neurons including their responsiveness to sex steroids are established during the perinatal period, when sexual differentiation of brain structures takes place.

The immediate early gene Arc/Arg3.1 plays a master role in synaptic plasticity and memory formation. Since its discovery in 1995 by Kuhl and by Worley, it was shown that it is regulated by neuronal activity and that its mRNA is strongly induced and transported to dendrites upon LTP stimulation. Within dendrites Arc/Arg3.1 was suggested to be translated on site. Changes in Arc/Arg3.1 have been directly linked to information processes in the brain.

In a recent study we showed, for the first time, that Arc/Arg3.1, a protein that is directly related to memory, is responsive to sex steroids in a sex-dependent manner (Broekling et al., 2022). This project aims at investigating the role of Arc/Arg3.1 in the context of neurosteroid-induced synaptic plasticity, since a a notable overlap exists in the mechanisms through which sex steroids and Arc/Arg3.1 influence hippocampal plasticity and memory. It could very well be that sex steroids function upstream of BDNF, LTP, Arc/Arg3.1 mobilization, F-actin assembly/disassembly, cofilin phosphorylation, and spine formation.

The development of synaptic connectivity from birth to adult includes the elimination of redundant, weak synapses, a process, which is called synaptic pruning. Neurons forge many more synaptic connections than is necessary for normal adult brain function. Proper synaptic pruning is required for normal cerebral development, since delayed synaptic pruning was found to be associated with mental retardation. Synaptic pruning was shown to be a function of microglia activity since supernumerous synapses are engulfed by microglia (Paolocelli et al., 2011; Zhan et al., 2014). It is of note in this context, that sex differences were found regarding the number and phagocytotic capacity of microglia in the neonatal hippocampus and microglia were shown to be responsive to sex steroids.